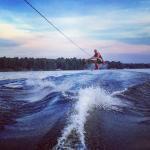 Man I feel I bad for you, that must be unbearable...…. My family of 5 has been slumming it in a vtx.

Who else is excited to get behind a new 25 LSV? The wave looks great. I pick mine up in 2 weeks 😬